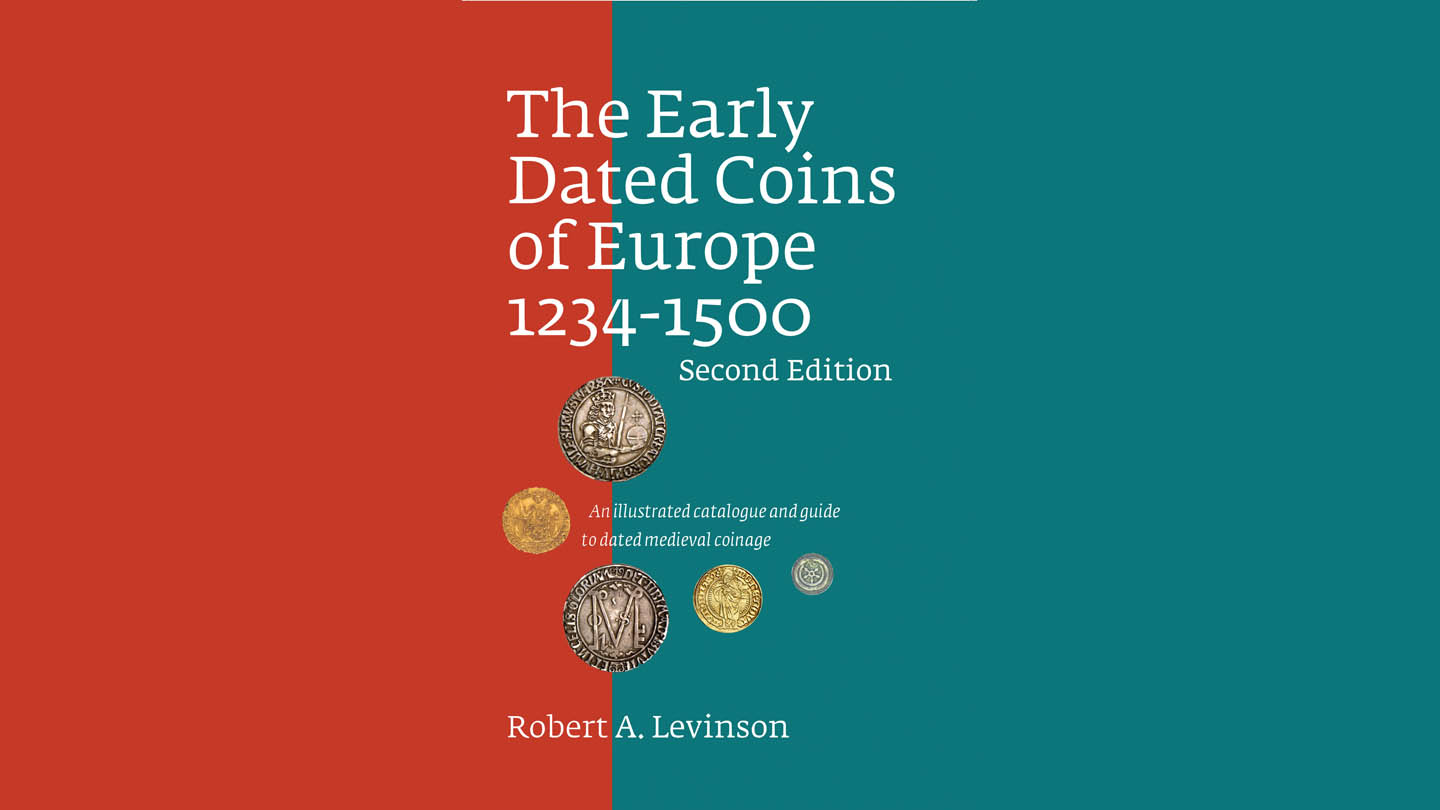 (Williston, Vermont) – The appearance of a date on a coin is something so obvious to the layman that it is taken for granted. It will no doubt then come as a shock to discover that the custom of placing the year of minting on coins is absent for most of coinage history. It is rather, a relatively modern phenomenon that did not begin in earnest until the end of the Renaissance, the start of the era of what numismatists would call “modern” coinage.

When the first edition of Robert A. Levinson’s The Early Dated Coins of Europe, 1234-1500 made its debut in 2007, it presented for the first time a comprehensive listing, by date, region, state, ruler, and mint, of all the known types of gold, silver, and copper coins struck in medieval Europe with an Anno Domini date of 1500 or earlier. Since then, it has become the worldwide reference for such coinage. These “early dated coins,” form one of the first links between medieval and modern coinage. Anno Domini dating of coins using Latin script did not begin until the mid-13th century, and did not become prevalent in Europe until three centuries later. Separating those few coins with dates from the many struck without them at a thousand mints by hundreds of different coin-issuing authorities presented the author with a daunting task.

The first edition of this book rendered obsolete the only volume remotely comparable, the long out-of-print work by Albert Frey in 1915. Today, when an early dated coin is sold, whether in Europe or America, it is accompanied by a Levinson reference number. The revised and updated 336 page second edition is in full color throughout, with improved illustrations, including more than 200 new ones, pushing the total to over 1,200. More than 125 new coin types and subtypes have been added, and there are over 500 updates to catalog descriptions.

The book covers the eight distinct regions in which dated coins were issued: Germany, Southern Netherlands (now Belgium), Northern Netherlands (now the Netherlands), Hapsburg lands, Switzerland, Scandinavia, Italy, and France and organizes the known pre-1501 Anno Domini dated coins chronologically within each region. There is for each of the coins listed, its full legend, description, ruler’s name, bibliographic references, weight, and rarity. Prices for each coin are given in very fine and extremely fine condition.

The large format, hard bound book is in four parts: The first is a lengthy history of early dated coinage, including discussions of the types, metallurgy, classifications, etc. The second part is the 215 page catalog of coinage, divided into the eight regions. The third part is a listing, again by region, of all the states issuing early dated coinage, with a history of each state’s coinage and a cross-reference to all the coins listed in the catalog. The fourth part contains eight appendices with alphabetical listings, translations of legends, a photographic glossary of coin types, a listing of early dated coinage using Islamic script, and other useful information. These glossaries and appendices are invaluable not only to collectors of “early dated coins,” but also to anyone needing a quick reference on medieval coin-issuing cities, states, and mints, identifying their basic designs, or reading their sometimes complicated legends. Every numismatist will find the annotated bibliography a vital resource.

The Early Dated Coins of Europe, 1234-1500 (ISBN 978-0-87184-601-3) is destined to be a standard reference for years to come. Sample pages from it and more information may be found at, www.coin-currency.com. It will be available in October from coin dealers, and by special order from book stores. It is not available from Amazon. In North America, copies may also be ordered on the publisher’s website www.coin-currency.com or by mail from Coin & Currency Institute, P.O. Box 399, Williston, VT 05495 for $88.95 including postage and handling. Major credit cards are accepted. Call toll-free 1-800-421-1866, fax (802) 536-4787 or e-mail: mail@coin-currency.com. There are also e-book and Kindle versions for $39.99 (ISBN 978-0-87184-010-3). Collectors and dealers outside North America should contact the book’s international distributors: